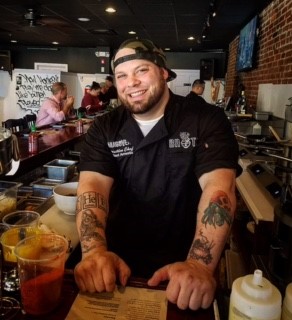 Born in Southbridge Massachusetts, Michael Arrastia rose to culinary fame when opening the award winning bacon gastropub, “The Hangover Pub” in Worcester, Massachusetts in 2016. The Pub has gone on to be awarded Best New Restaurant in Central Massachusetts and Best Brunch in the state by Livingly.com. It has been featured on shows such as Chronicle, Phantom Gourmet, and Wicked Bites.

Chef Michael decided to experiment with his love of ramen and opened his second restaurant, the American-Japanese fusion noodle bar “Broth”. Broth fuses together traditional Japanese broths with American flavors. Broth has since been featured on Man Vs. Food for the Travel Channel and has won a national elite award for top ten restaurants in Massachusetts.

Chef Michael has also been featured on the Food Network and has won back to back Worcesters best chef people's choice awards. Chef Michael is more than just a chef! When he’s not working, his hobbies include music, art, comic books and spending time with his wife Ashley and two children Logan and Hazel.