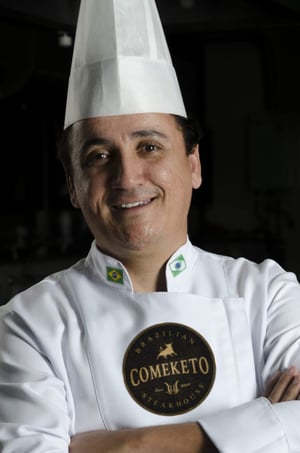 Chef Eudemar is From Curitiba, Brazil - with 25 + years of experience, Chef Eudemar has been worked in many roles in the kitchen. With a vast array of responsibilities, he has concord many accolades.

He specialized in Mediterranean Cuisine in Le Roches International School of Hotel Management in Marbella - Spain; he was trained in the use of Electrolux Professional equipment - Pordenone -Italy; is one of the Authors of the Book "Menu: How to Assemble an Efficient Menu - Editora Roca 2002 is a grad from vocational school in Gastronomy at the Grande Hotel São Pedro, Hotel Escola Senac in 1996, was instructor of the Gastronomy Course of Senac - Recife PE from 1998 to 2003, was chef of the Curitibano Club/Buffet Deucher from 2006 to 2014, currently is a professor at Positivo University in Curutiba, Brazil – Owner of Eudemar Cavalcanti Gastronomy in Curitiba, Brazil also acting in a role of executive Chef for Comeketo Brazilian Steakhouse in Leominster, MA.