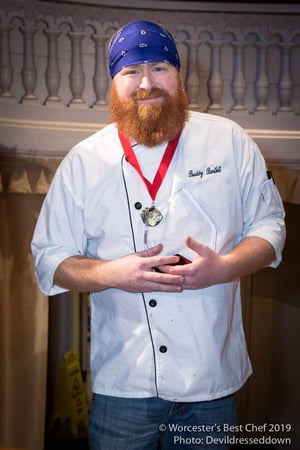 Buddy Bartlett started washing dishes in his home town at the age of 14 in a local breakfast restaurant. From there, he worked his way up on the line in various other restaurants throughout high school. Throughout high school he started working on his skills from his culinary instructors, Mr. B and Mr. Mattai.

After Blackstone Valley Tech, Buddy went on to earn a degree from Johnson and Wales. After, he started working at Vinny Testa’s in Shrewsbury. He worked in other restaurants ranging from a steakhouse, a country club, sushi restaurant, depot street tavern, and maddis cookery. He is now behind the scene at bushel n' peck creating new specials and take home meals.

In Buddy's spare time, he enjoys spending time with his two kids Brenden (17) and Maddie (10) and girlfriend, Kandy. Any spare time away from the restaurant Buddy is co chair of an international youth exchange, that his son travels with.

Most recently Buddy competed in the 12th annual Worcester’s Best Chef Competition, and placed third in the People's Choice portion of the event.