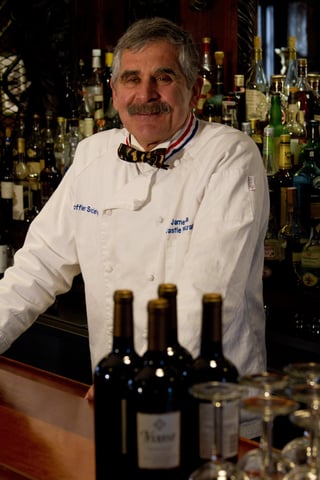 Chef Jim Nicas is co-owner of the Castle Restaurant in Leicester, MA. He has been buying and cellaring wine for the restaurant for some 45 years. The Castle's cellar is one of the top 100 in the nation, and has been a guest lecturer at the University of Massachusetts Hospitality program in Amherst Ma.; Johnson and Wales University in Providence R.I.; and Holy Cross College in Worcester, Ma. He has also been involved in many wine and food groups.

Among these are the Order Compagnon de Bordeaux since 1975, and the Les Amis d'Escoffier society of New England since 1976, and served as the President of the New England chapter since 1999. Chef James has also been very involved in some of the largest and most prominent wine and food organizations in the world... Les Amis d'Escoffier and Le Confrerie de la Chaine des Rotisseurs. He began as a local chapter member, rising to Vice Chancelier Argentier (2nd in command) of the local Colonial New England Bailliage. In 1995, he became the Bailli, or chapter president. During this time, besides the local Northest office, James took on the office of Chambellan Provincial of the Northeast region (2007)...extending from the Canadian Border...through upstate N.Y. to the lake regions and south to the mid Atlantic states. Also during this period, he took over the regional Northeast region as Echanson Provincial which is the wine professional for the Northeast region (2005-06).  He is currently living somewhat a quieter life style as a guest lecturer, a judge at the Worcester Best chef contest...serving on the advisory board for Salter College; Quinsigamond  Community College, Bay Path regional high school, an many other industry related community events.